Racing drivers are a different breed. It is no secret that It takes a different level of psychological programming to do what they do. Heroes is a movie written by Manish Pandey,  who gave us “Senna”, a tribute to the late Brazilian driver Ayrton Senna. This time around, Pandey, focuses on Michael Schumacher with his new feature film. Calling upon four racing legends including two-time Formula 1 world champion Mika Häkkinen, former Ferrari F1 driver – Felipe Massa, nine-time Le Mans winner Tom Kristensen and World Rally Championship runner-up Michèle Mouton. The movie begins with beautiful cinematic sequences of all four arriving at a mansion in an interesting set of cars. They spend a few days together and begin narrating their stories in a conversation between them. While the viewer is allowed access to the stories from around and kept involved.
Watching the 1:51 min documentary feels like reading a well-paced, razor-sharp book. The precise descriptions of the tales as told by the drivers themselves, segmented into different chapters is a visual and audible treat. The stories begin from the origins of all four drivers, their backgrounds and different upbringings. Followed by the first time they all got behind the wheel and went racing.
In the documentary, Mika Häkkinen talks about his rivalry with Schumacher from the junior categories before both made their Formula One debut. The rivalry that pushed Häkkinen even further towards the desire to win and become a double world champion.
Tom Kristensen, or Mr LeMans as he is called, gives an interesting anecdote about how his wish to adjust the brake pedal in his Audi LeMans car on his debut. But the engineers telling him he needed to be the fastest driver of the three to dictate that. How that helped him start his career at LeMans, going on to win nine times.
Felipe Massa, the Brazilian driver told his story about his origins and spending time near the Sao Paolo race track watching Senna drive and win. Followed by his career in Formula One and achieving his dream to become a driver for Ferrari. He touched upon that fateful day of his home race at Sao Paolo where he almost won the world championship in 2006.
Michèle Mouton is the first and only female driver to have ever won in the World Rally Championship. Mouton highlights how she braved through the WRC to almost become the world champion in 1982 for Audi. But was bettered by Walter Rohrl in the final round allowing Mouton to settle as runner up.
The dangerous world of motorsport
Mouton highlighted the crash that sealed her fate as the runner up for the title. Massa opened up about the crash in Hungary in 2009 where debris from another car hit his exposed helmet that left him in a coma. Kristensen went on to talk about the crash he survived driving in the German touring car championship (DTM). In 2007, Kristensen was involved in a motor race crash where his car absorbed an impact of 63G. Häkkinen finally highlighted his crash from 1995 in Adelaide. At a time where no head or neck safety protection in the vehicles was present apart from the helmet. The severity of the impact resulted in severe neck injuries for Häkkinen, which he so miraculously survived.
The movie concludes with an emotional tribute to Schumacher who is battling for his life after suffering head injuries during a skiing accident in 2013. All four drivers — Massa, Häkkinen, Kristensen and Mouton go on to talk about their relationship with Michael Schumacher on and off the track. All the while making poignant, subliminal statements about the seriousness of head injuries and how it can not only impact careers but the personal lives of anyone.
A Fitting Tribute
The movie is also a tribute to Charlie Whiting, the former Formula One race director who passed away suddenly on 14 March 2019 a day before the Australian Grand Prix. Whiting played a pivotal role in making the motorsport safer for all drivers as well as fans over the course of his tenure.
Heroes – the documentary made its worldwide release in January 2020. But has only now been released on Netflix in India. Whether a racing fan or not, writer Manish Pandey’s — Heroes is a must-watch for all. 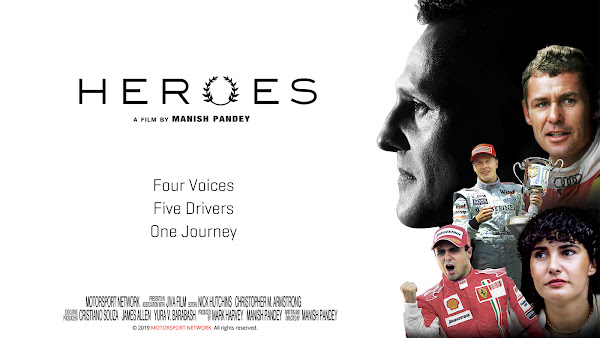