An in-depth look at the life and work of American journalist James Foley, who was killed by ISIS terrorists in 2014.

This touching film, made by a childhood friend, dwells on Foley’s life rather than his murder, including the extraordinary stories of what it was like as an Isis captive. The American journalist James Foley is best known for his death. Kneeling in the desert, wearing an orange jumpsuit, he was beheaded by a masked terrorist, later discovered to be Mohammed Emwazi.
Storyville: Jim – The James Foley Story (BBC4, Sunday) does not show – or dwell on – his murder. It is a film, made by his childhood friend Brian Oakes, about what came before. It is about James’s – Jim’s – life, told by his parents in their cosy New Hampshire house, and his sister and brothers, so many brothers. Also by his colleagues, brave freelance war correspondents, operating without backup on the frontline. And by his fellow hostages, those who – because of the policies of their governments – came home alive.
It is a beautiful film. Unbearably sad, because of the agony his family and friends went through, the false hope, the regrets; and, of course, because of how the story – and Jim’s life – ends. But it is also celebratory and inspiring, with moments of tenderness, humour, even of joy. Jim was, it seems, a most excellent dude. So says everyone, including, most poignantly and touchingly, the people with whom he was held captive.
Pierre, a French photojournalist, recalls Jim’s unselfishness and his generosity with spare clothes, and says he was the only member of the group (at one point, there were 19 of them together) who never once cheated with food. Jim shared everything.
And philosophical Nicholas, another French journalist, has interesting things to say about captivity and torture, and says he had arguments with every other member of the group except for Jim. “Jim would call people very easily ‘bro’,” says Nicholas. “I dislike these kinds of familiarities. So I would usually not accept anyone tell me: ‘Hey, bro.’ But from Jim, yes, I mean, please do. Because Jim was actually my brother, I felt like this.”
And lovely Daniel from Denmark, who says Jim was such a good listener. “He managed to make the room bigger in a way by being small himself, and that is a very, very difficult thing to be.”
It is an extraordinary picture they paint, of this hellish existence of uncertainty and fear, hunger and cold. Every time the door opened, they didn’t know if it meant torture, execution even, or a move somewhere else, possibly even release. Yet, somehow they made something of it, and created a kind of family. Daniel, especially, speaks of this. “We started to have our own small world that made everything much easier to survive in a way.” There were even advantages. “We didn’t have to think about economy, we didn’t have to think about bank loans, or the price of gas at the moment. You adapt to the situation, and then suddenly this whole thing becomes part of your life.”
They organised exercise classes, delivered lectures, gave each other lessons in massage. And they played Risk. I love the descriptions of their Risk games, using date-stone and olive-pip armies and a map of the world scribbled on a piece of cardboard. Pierre remembers the amazing fights that broke out, when a bunch of war journalists played a game about taking over the world: “‘I am not playing any more, you are cheating!’ ‘The guards are coming, fold the board!’ ‘No, I have almost all Africa, I will not stop now!’ ‘Guys, it’s just a game, just close that shit, I don’t want to be beaten because of you!’ But yeah, it was just great fun.”
They had Christmas, too. No presents, but they sat in a circle and said things to and about each other. Daniel said some jokey stuff about Jim, about him being a big disappointment, not the big brave famous war journalist he had heard about. But he went on to say he was the most honest person he knew, without evil, pure good, sometimes too good. “When I went to bed that night, I really felt I had the best Christmas night in my life,” says Daniel. It was Daniel who, when he was released, took James’s last letter – to his family – out with him. Not physically, too risky; he had memorised it all.
Some fragments of good have even come from Jim’s death. His family have come to know and understand him better, and grown closer. Pierre is 100% sure that when Jim was kneeling in his orange jumpsuit, knowing he was about to die, he would still have appreciated the view over the Euphrates valley. Nicholas, who, I think, is struggling with having being released while Jim wasn’t, says: “He died as a free man.”
A quick word about someone who isn’t present to talk about Jim. British photojournalist John Cantlie – who was captured with Jim, knew him best and spent the most time with him – isn’t here to talk about his friend. Because he’s still there, still a hostage. Don’t forget John. 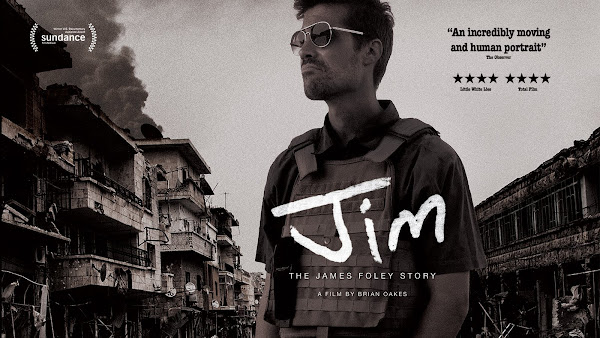