Home » Biography » The Newspaperman: The Life and Times of Ben Bradlee

The Newspaperman: The Life and Times of Ben Bradlee


A documentary about Ben Bradlee, the iconic editor of The Washington Post.

John Maggio’s documentary about legendary newspaper editor Ben Bradlee could not be more relevant at a time when such legacy media as The New York Times and The Washington Post are leading the journalistic pack with their reporting on the current presidential administration. Chronicling its subject’s life and career in fascinating detail, The Newspaperman: The Life and Times of Ben Bradlee will prove catnip to journalism and political buffs, not to mention anyone who cares about the free press and its role in our democracy. The film, which recently garnered a PGA Award nomination, is set to make its debut Monday on HBO.
The Newspaperman begins by implying parallels between the Post‘s reporting on the Watergate scandal and President Donald Trump decrying the mainstream media as “fake news.” In a clip from an interview with Mike Wallace, Bradlee says that the press has to “hunker down” in the face of attacks from those who don’t like its reporting. “Our business is not to be loved, but to go after the truth,” he says.
The doc delivers an extensive biographical portrait, using Bradlee’s own gravelly voice to narrate via excerpts from the audiobook version of his autobiography A Good Life. It includes such elements as Bradlee having suffered from polio as a child; graduating from Harvard by the skin of his teeth; marrying and later divorcing Jean Staltonstall, whom he describes as “the first and only girl I had slept with”; serving in the Navy during World War II, which he largely spent in the South Pacific; and fulfilling his longtime dream of becoming a foreign correspondent, working for Newsweek.
“Bradlee always knew he was the luckiest son-of-a-bitch in the world,” comments Jim Lehrer, one of many notable figures providing commentary.
One of the most interesting sections concerns the close friendship Bradlee and his second wife, Antoinette (Tony) Pinchot, had with then-Senator John F. Kennedy and his wife Jackie. The relationship continued even after JFK became president, raising considerable eyebrows because of the potential conflict of interest. The documentary includes home-movie footage and audio recordings of the foursome sailing and golfing, and it reveals that JFK relentlessly pursued Tony romantically, even assaulting her at a party. He also had an affair with her sister Mary, who was murdered under mysterious circumstances in 1964.
As one might expect, The Newspaperman spends much time on Bradlee’s lengthy tenure at the Post. After being named executive editor, he revitalized the paper, bringing it to national prominence and raising its profile in Washington thanks to such innovations as the introduction of its Style section. Henry Kissinger amusingly comments, “They covered my social life more intensely than I thought the national interest required.”
The film includes long sections devoted to such important events as the paper’s legal battle to publish portions of the Pentagon Papers (the subject of Steven Spielberg’s upcoming film The Post, featuring Tom Hanks as Bradlee) and, of course, its Watergate investigation.
“The air was thick with lies and the president was the lead liar,” Bradlee comments. John Dean observes that the Post was the only major news outlet really pursuing the story, and we hear an excerpt from Nixon’s audiotapes in which he plots revenge against the paper. Thanks in large part to All the President’s Men (1976), the film adaptation of Bob Woodward and Carl Bernstein’s best-selling book about their reporting, Bradlee became a national celebrity, and it was clear to everyone who knew him that he loved the attention.
His tenure at the paper was not without its missteps, as illustrated by the infamous Janet Cooke episode in which the recently hired African-American female reporter won a Pulitzer Prize for what was later revealed to be a completely fabricated story about an 8-year-old heroin addict.
Throughout, the doc weaves in Bradlee’s personal life, including his third marriage to Sally Quinn, 20 years his junior, and his joy at becoming a father again in his fifties.
The Newspaperman benefits greatly from the presence of many of Bradlee’s friends and colleagues, who speak about him in adoring or near worshipful terms. Besides the aforementioned, they include Tom Brokaw, Norman Lear, Tina Brown, Richard Cohen, Dan Graham, David Remnick, Robert Redford and, of course, Woodward and Bernstein. But it’s Bradlee himself, via the narration or clips from interviews — he tells Charlie Rose, for example, that his only regret is the pain he caused his first two wives — that gives the film its most resonant moments. 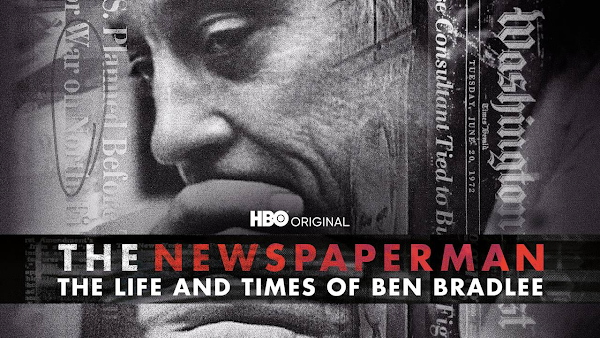