This special sees Louis travel to America to investigate the story of a man who has become one of the most controversial and captivating icons of recent times: the gun-toting, self-described 'gay hillbilly' and 'Tiger King' Joe Exotic.

Tiger King was one of the most hyped viewing experiences of last year. It was also one of the most uncomfortable. The seven-part Netflix documentary took us into the world of the mullet-haired, gun-loving Joe Maldonado, aka Joe Exotic, a flamboyant Oklahoman tiger zoo owner, and his nemesis, the Florida animal rights activist Carole Baskin. Tiger King was released a few weeks into the first lockdown, just when everyone was ready for a series to sink their teeth into. It was a phenomenon.
At first, Exotic seemed merely exuberant and eccentric, but it gradually became clear that darker forces might be afoot. In January 2019, he was sentenced to 22 years in jail for 19 tiger-related crimes and – even more serious – hiring hitmen to kill Baskin. His supporters claim he was set up. They spread rumours that Baskin had murdered her ex-husband, Don. By the end of the series, it was unclear what journey the viewer was being taken on and who, as far as the documentary was concerned, the real zoo animals were.
A year on, here’s Louis Theroux to remind us that he got there first. A decade before Tiger King, there was America’s Most Dangerous Pets, a 2011 documentary in which Theroux spent time with unusual animal owners, Exotic included. In the 90-minute one-off Louis Theroux: Shooting Joe Exotic, Theroux revisits his subject nine years on and tries to work out what has happened, examining his own experience with Exotic and wondering whether he could have done more. The catalyst is a letter Joe sent from the depths of prison lockdown, asking a British journalist to get in touch with Theroux and tell him “I need to tell the real story, but they keep me silenced”.
Theroux has had a busy year. He has done several entertaining podcasts, and this is the latest in a series of films in which he revisits old material. The format suits him. He’s patient and thoughtful first time around, even more so at the second pass. There’s plenty of footage that wasn’t aired before. Off the record but with the camera still rolling, Joe told Louis about hitmen and his fears that either he or Baskin would have to die. Re-examining the footage, Theroux says he thought it was “just talk”. A more measured picture of Exotic emerges, a vulnerable but dangerous man whose strange behaviour was indulged by the people around him until it was too late.
The film doesn’t simply retread old ground. When Tiger King’s producers get wind of Theroux’s plans, their lawyers are in touch to remind him that many of the characters are under exclusive contracts. Exotic seems to have been paid for his contributions. The people “silencing” him are the ones who gave him the fame he’d craved for so long.
“Without realising it, I’d wandered into something very different from the normal documentary terrain,” Theroux intones over footage of himself shaving. He’s fooling no one. For his genial manner, he has a steel backbone and obviously relishes the scrap. You suspect he sees it as a proxy war between Netflix documentaries – loud, trashy and ethically dubious – and Louis Theroux BBC documentaries – measured, intelligent and humane. He has one terrific coup de theatre, interviewing the Baskins at Joe’s repossessed park, where they pick over the rubbish and examine the anti-Baskin graffiti scrawled on the wall. “In my view what [the Netflix filmmakers] did wasn’t just unethical,” says Carole’s husband, Howard, “it was outright cruel.”
The question remains how far into the hall of mirrors Louis can go. Can we look forward to him one day revisiting his revisitations, Louis on Louis on Louis? Whatever he comes up with later, this unrepeatable confluence of subject, phenomenon and previous access will stand as a career highlight. It’s the documentary this extraordinary story deserves. But if you hadn’t had enough of Joe Exotic already, you will afterwards. Time to let imprisoned tiger kings lie. 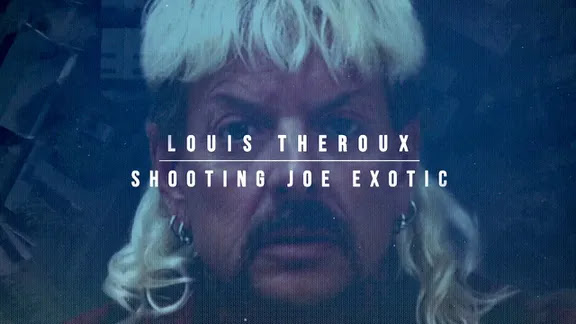