A glimpse into infectious disease specialist, Dr. Anthony Fauci who has led the U.S. fight against every epidemic the country has faced from AIDS to SARS to Ebola, and the ongoing COVID-19.

Over the course of 2020, as the COVID-19 pandemic ravaged the United States, National Institute of Allergy and Infectious Diseases (NIAID) Director Anthony Fauci became a focal point of the #Resistance set. His apparent compassion, measuredness, and insistence on adhering to basic science stood in stark contrast to the general response by the government under the Trump administration — marked by callousness, incompetence, and a deference to business interests and the demands of crybabies who didn’t want to wear masks instead of caring for public safety. The new documentary Fauci, produced quickly because of his unlikely meme status and following him over the course of his pandemic response, is the latest addition to the general wave of media adulation. But does Fauci truly deserve the heroic aura bestowed upon him? While he certainly looks good in comparison to Trump, that’s a low bar, and we’ve seen the danger in latching onto public figures just because they stand in opposition to the widely hated (now-former) president.
Sam Adler-Bell has already done a great deal of work making the case against deifying Fauci. Examining both his response to COVID-19 as director of NIAID and his actions with the National Institutes of Health (NIH) during the height of the AIDS crisis, Adler-Bell identifies in Fauci a troubling pattern of exercising too much caution in order to curry political favor rather than rock the boat of the establishment, no matter how badly things may need to be rocked — like, say, during a pandemic. This is readily apparent from how he told people that “there’s no reason to be walking around with a mask” in March 2020 — a stance he of course reversed later. A tremendous amount of public hatred for Fauci is in obvious bad faith, generated by Trump’s petty sniping, the right-wing media machine, and Facebook groups for people whose children no longer speak to them. But some of the distrust of him is understandable, stemming from these kinds of disastrous inconsistencies in messaging. In general, the conception of him as an oppositional figure to Trump is strange, since at the end of the day he’s part of the government and thus shares some portion of the blame (certainly not the greater share of it, but still) for the numerous flaws in the US COVID response.
It’s tough to tell which image of Fauci emerged first from the mainstream media’s all-or-nothing polarization between the conservative outrage machine and the centrist/liberal networks. Did liberals adulate him, causing reactionaries to hate him out of spite? Or did liberals mass to his defense because of the chants of “Fire Fauci!” at Trump rallies? Things happen so quickly now that both phenomena almost seem to have manifested simultaneously, as if social media has trained us to instinctively sort out who belongs to which faction as soon as they become important. In such an environment, nuance is left behind.
Fauci is a great case study for this topic. Due to his status in the NIH during AIDS, there’s an extensive archive of news pieces featuring him, and he appears as a character in the 2012 historical documentary How to Survive a Plague, which covers AIDS activism in the ’80s and ’90s. (I would highly recommend that film, by the way. It makes terrific use of archival materials and thrums with righteous energy.) Contrast how Fauci portrays him with that earlier film, made before anyone got the memo that he’s supposed to be hero. Fauci was a frequent target of ACT UP protestors, who perceived him as holding up AIDS research and new drugs and treatments. Larry Kramer, never one to mince words, went so far as to call him a murderer at one point. The two actually later became friends, but that was only after Fauci was pushed by these protests to speed up clinical trials and allow other progress to happen.
In this story, Fauci, while not malicious, obviously has an antagonistic role, and all credit should go to the activists for swaying him to take more action. Incredibly, Fauci instead frames these events as if he is the protagonist, as if giving in to external demands is somehow a heroic act. Notably, Fauci is an incidental character in How to Survive a Plague, appearing mainly in two sequences (I had to rewatch the film to confirm that he was in it). To people suffering from AIDS, he was but one face among many in a government that would have preferred to let them die. Of course this biography would put him front and center (and he was undeniably important in AIDS research), but the difference in optics between these two films is stark.
While Fauci indeed deserves credit for not being swayed by homophobia and being the one high-ranking official willing to meet with ACT UP, Fauci is nonetheless in an odd place, having to posit his fundamentally reactive and defensive role in the political fight over AIDS as somehow proactive. If you want to understand why this can’t always work, look no further than the fact that in drawing parallels between past and present (sometimes with split screens), the film makes the unintended but risible suggestion that ACT UP protestors are comparable to contemporary anti-maskers and anti-vaxxers. The same problem applies to how the film follows him during COVID. While he seems to generally be a competent doctor and by all appearances is sincere in his desire to do best by the public, directors John Hoffman and Janet Tobias leave little room to discuss his failures. One science journalist is allowed to say that he was wrong to tell people not to wear masks early in the pandemic, and then this issue is never raised again. Caught in the false binary between warring media images of its subject, the documentary picks a side instead of honestly examining him. Fauci is not quite a hagiography, but it comes close. 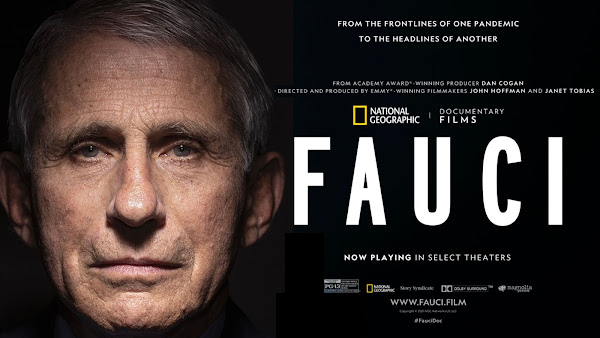